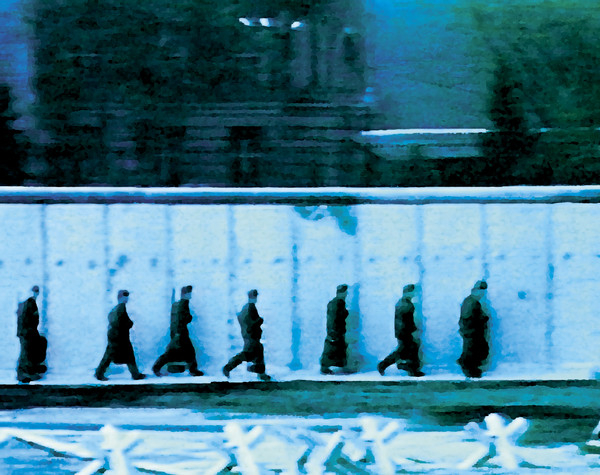 Parallel Worlds will present the work of Stefan Roloff, a German- American artist born in West Berlin, and Harf Zimmermann, a German photographer born in Dresden who grew up in East Berlin, together for the first time in the the German Consulate General New York and 1014, United States.
The exhibition deals with the fear instilled by the physical presence of the Berlin Wall, as cultivated by the wall-regime (Roloff) and the regime‘s inner pettiness and internalized
fearfulness (Zimmermann). Living on opposite sides of the Berlin Wall, Roloff and Zimmermann spent most of their lives not knowing about each other’s work or existence.

Stefan Roloff
Beyond the Wall
In Stefan Roloff‘s art, walls are symbols of racism or a divide based on a manufactured scare. Seeing the crumbling of the wall that surrounded him when he grew up, he witnessed how ultimately it was a temporary phenomenon, comparable to a phantom of the mind.
In 2017, Roloff wallpapered stills from videos he had originally filmed in 1984 of border sentries onto a monumental 10’ x 755’ strip of the remaining Wall. The effect was painterly. Close up the images were almost abstract, reminiscent of a Velazquez painting. The further away you walked, the more realistic they became.
For this current show, Roloff has expanded on this concept through a series of images on acid-free Hahnemühle paper that look like watercolors. In these images, the architecture and the activities of the border guards seem imaginary—any traces of a “documentary reality” have vanished. Also in Roloff’s installation are his original source-videos. From today‘s point of view their kafkaesque atmosphere seems unreal, an echo of a reality that has ceased to exist.

Harf Zimmermann
Inside Building No. 10, North Wing
Dictatorships and authoritarian regimes habitually construct their edifices in the most daunting, forbidding fashion. Inside and out they’re meant to outdo our daily experience, stripping the individual of any familiar sights, and focusing instead on what is most feared. During the 20th century, Germany developed a tradition in that regard. Hitler’s monstrous plans for the capital “Germania” are a perfect example.
Twenty-five years after the fall of the East German state and the evaporation of the terrors imposed by its Ministry of State Security (Stasi), Harf Zimmermann gained access to the last unreconstructed remains of the Stasi headquarters: Building No. 10, North Wing. Disquietingly, it looked as if the members of the Stasi and their furniture had been evacuated just a month or so earlier. More unsettling was the fact that its rooms—plastered with insipid wallpaper—presented a grotesque contrast to the unrelenting power that once emanated from the entire building. From the executive offices all the way to the antechambers, it is evident that the powers-that-be had created a comfortable petit-bourgeois environment for themselves.
Inspired by Hannah Arendt’s Banality of Evil, Zimmermann has captured the last visual traces of the Stasi on large-format negatives and life-size prints.
In addition: video pieces
LIFE IN THE DEATH ZONE
To mark the 30th anniversary of the fall of the Berlin Wall (November 9, 1989), Anthology Film Archives be hosting the German-American filmmaker and installation artist, Stefan Roloff, for a program containing four of the short videos that comprise his multi-part work, LIFE IN THE DEATH ZONE, as well as one of his later interview-based pieces, MARIO R.
Born in West Berlin, and currently living and working between Berlin and New York, Roloff shot a series of video pieces in 1984 that reflected his fascination with the perceived normalcy of the work that ordinary people were called upon to do in the midst of the death strip that surrounded his native city and separated Germany for 28 years. The subject of LIFE IN THE DEATH ZONE is the East German border sentries’ seemingly surreal activities as they go about what was to them their everyday life. Roloff’s images convey the normalcy of mutual, deadly observation. They are not about the GDR or other political terms but about a human condition.
Shot in 1984 and edited in 2007, these works peer into the Wall’s death strip from the outside. More recently, however, Roloff has created an archive of filmic portraits looking at the GDR from the inside, through the eyes of citizens who were persecuted, imprisoned, attempted escape, or lived simple, normal lives. This program will include MARIO R., in which Mario, seen only in silhouette, narrates the haunting story of his experiences as a gay man in former East Germany, his thwarted attempt to escape to the West for love, his imprisonment by the Stasi, and his final passage to the free world where traumatizing experiences awaited him before he ultimately found happiness.
LIFE IN THE DEATH ZONE
1984/2005, 28-min excerpt, digital
MARIO R.
2013, 59 min, digital. In German with English subtitles.
Sat, Nov 9 at 9:00.

More information about the artist

Fill in the form below so that we can contact you with more information about this work.